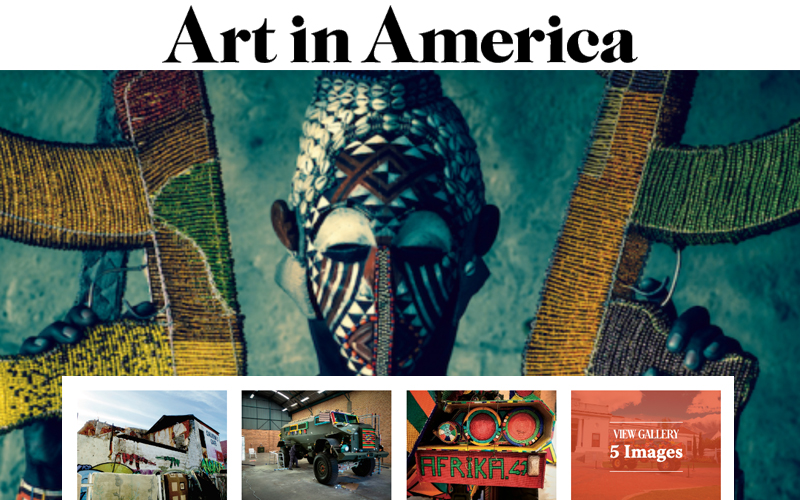 Johannesburg’s past haunts its collective consciousness and its landscape. Most strikingly, massive gold mine dumps, pallid yellow in color, dot the periphery of the central business district. Bespeaking exploitation of both labor and resources, these toxic heaps have become an emblem of the city that was spawned by the massive gold rush of 1886. The bright tailing piles have drawn the attention of documentary photographers such as Jason Larkin and Sally Gaule, but the city’s juxtaposition of glitter and grimness is not restricted to photographs. 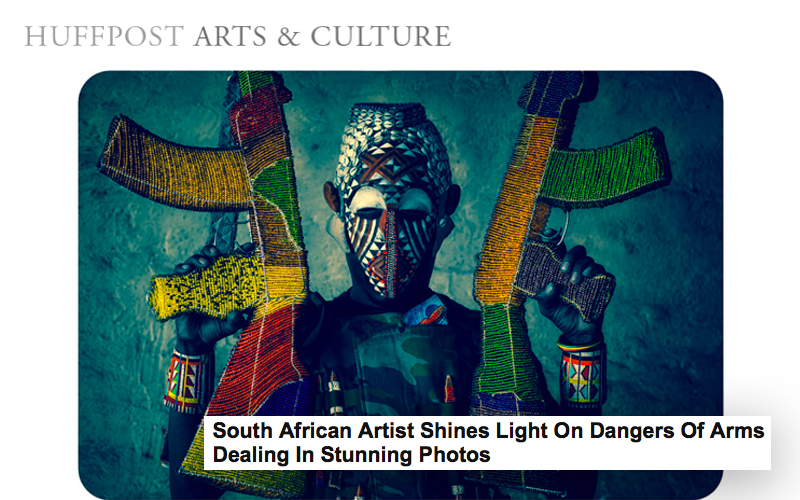 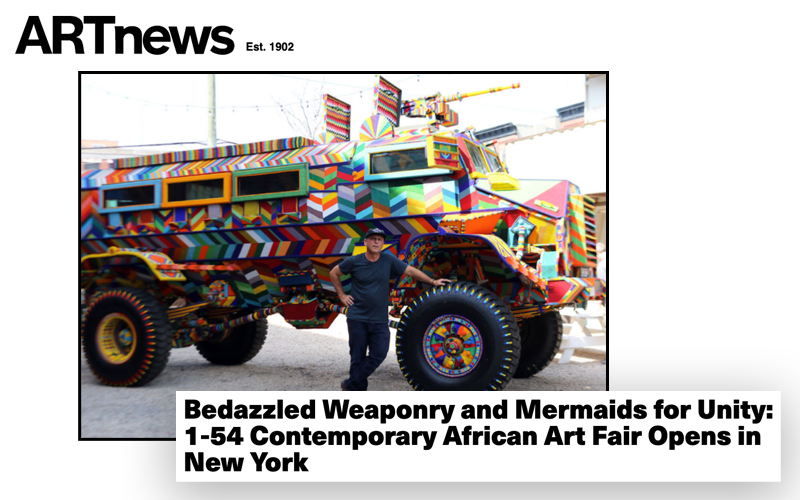 Outside the 1-54 Contemporary African Art Fair in New York—the fourth edition of which opened today at Pioneer Works in Brooklyn—is a disquieting military artifact bedazzled with some 70 million brilliantly colored beads. Beneath them all is a Casspir “mine protected vehicle” of a kind that was prevalent in apartheid-era South Africa, where, during the late 1970s and early ’80s, the streets were prowled by armored vehicles that were widely despised and feared. 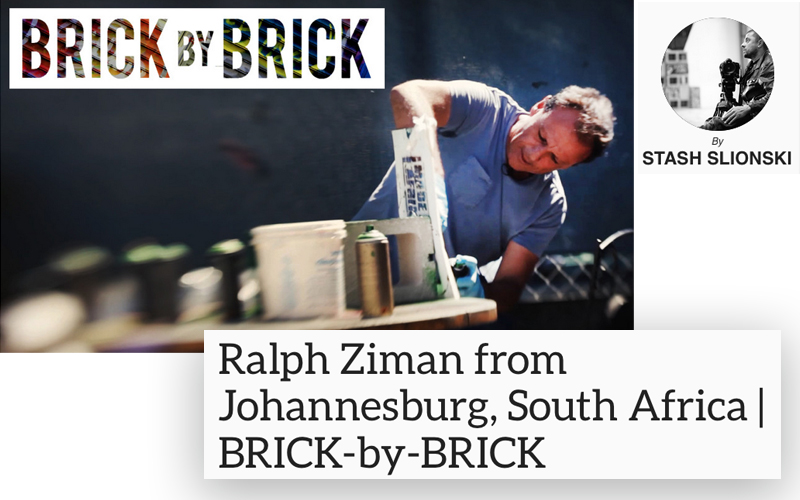 RYOT’s Original Series ‘Brick By Brick’ highlights a different artist every week by providing each artist with a blank cinder block canvas as the artists creatively express their voice while challenging themselves as they adapt to a different art-form.

This week features Ralph Ziman from Johannesburg, South Africa with a vision to encapsulate the culture of his native land through art while re-defining how such art can be used in society in conjunction with personal identity. 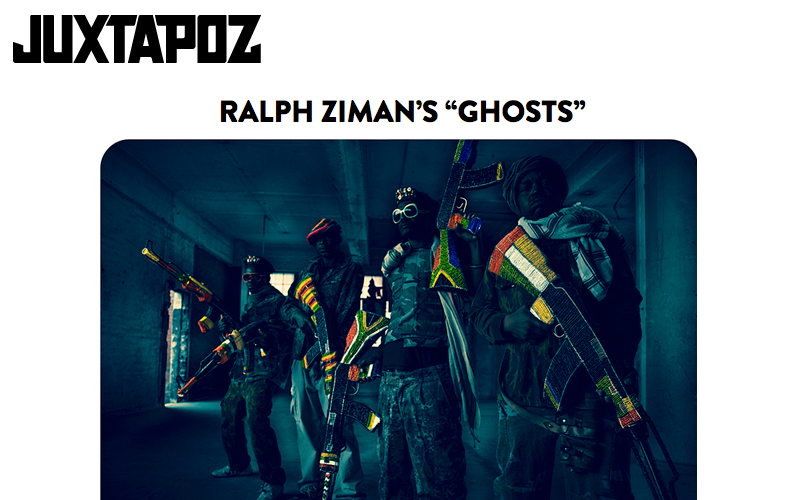 In his series “Ghosts”, South African artist Ralph Ziman draws inspiration from the arms trade and the civilians that are killed as a result of it. In the series, Ziman explains, “I had six Zimbabwean artists use traditional African beads and wire to manufacture several hundred replica beaded guns like AK-47s, and several replica beaded general purpose machine guns (GPMGs), along with ammunition. Upon completion, beaded guns were the subject of a photo-shoot in crime ridden downtown Johannesburg.” The resulting photographs are visually bold and intimidating through the use of a cool, foreboding color palette that draws the viewer in while also creating an uneasy feel. 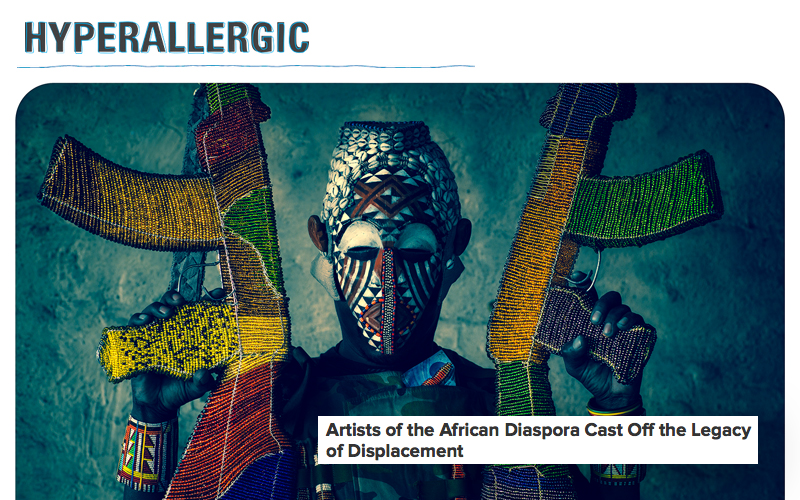 Artists of the African Diaspora Cast Off the Legacy of Displacement

Ralph Ziman’s photograph “Hondo (War),” for instance, shows a man wearing a traditional Zimbabwean mask and holding two AK-47s that are fully beaded in the style of local artists and makers. His image turns the stereotype of “violent Africa” into a statement on culture and misrepresentation, reclaiming an image that is familiar to the Western world — an African man wielding heavy artillery weapons — and recasting it to reflect the artist’s own notions of identity as a South African. 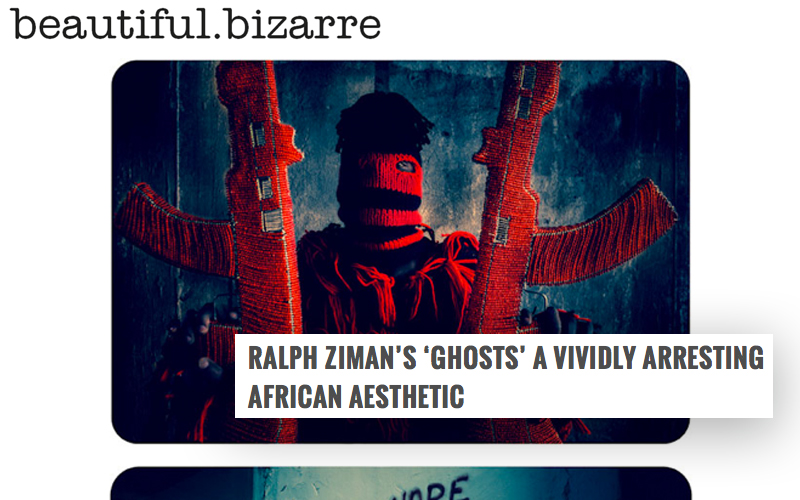 Colours caught on fire and conceptually fierce – Ralph Ziman’s photographic series GHOSTS deals with the international arms trade and Africa, a trade that for the most part only goes in one direction: into Africa; and one that not only fuels, but also sustains conflict across the continent. Based in the City of Angels, Ziman is a revered writer-artist-film director and an extraordinarily humble human. 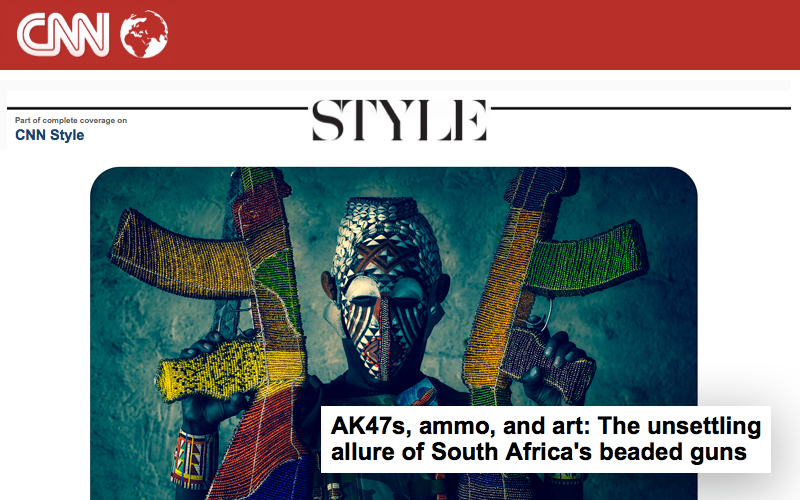 South African artist and photographer Ralph Ziman explores the horror and awe of the African arms trade in “Ghosts.” Working with local bead artisans and street vendors, he created hundreds of mock bullets and AK-47s. Ziman later traveled with the artists to one of Johannesburg’s most crime-ridden neighborhoods, where they posed with their fantasy weapons. 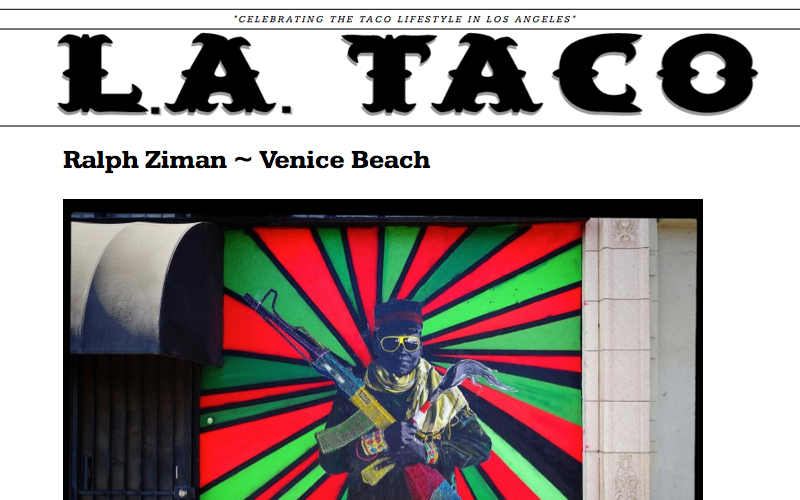 South African born Artist / Photographer Ralph Ziman now calls Los Angeles home, and he presents his first show in the United States this weekend. “Ghosts” opens next Saturday at C.A.V.E. Gallery on Abbot Kinney at 6:30pm. He’s put up a number of murals and wheatpastes around town drawn from the colorful and provocative imagery he’ll show at the gallery. Keep reading for insight into the source of his images and some background info on Ziman. 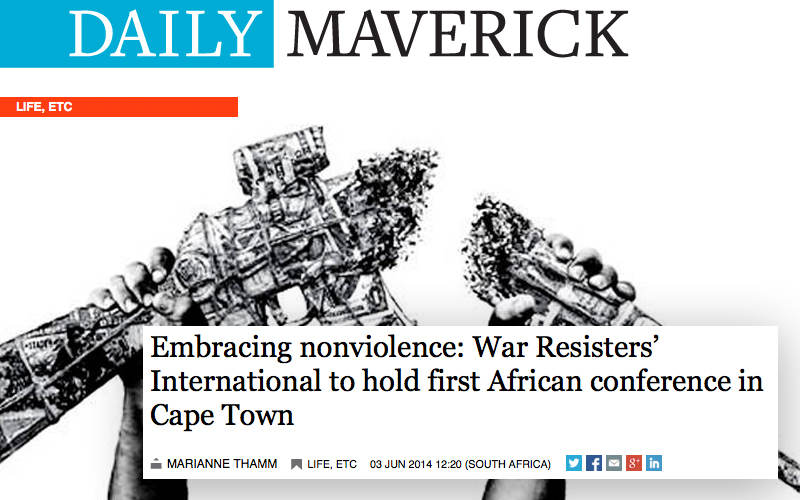 To mark the 20th anniversary of democracy in South Africa as well as the centenary of the deadliest conflict in human history, War Resisters’ International, founded in 1921 by conscientious objectors to the First World War, will hold its first conference Africa in Cape Town from 4 – 8 July. By MARIANNE THAMM. 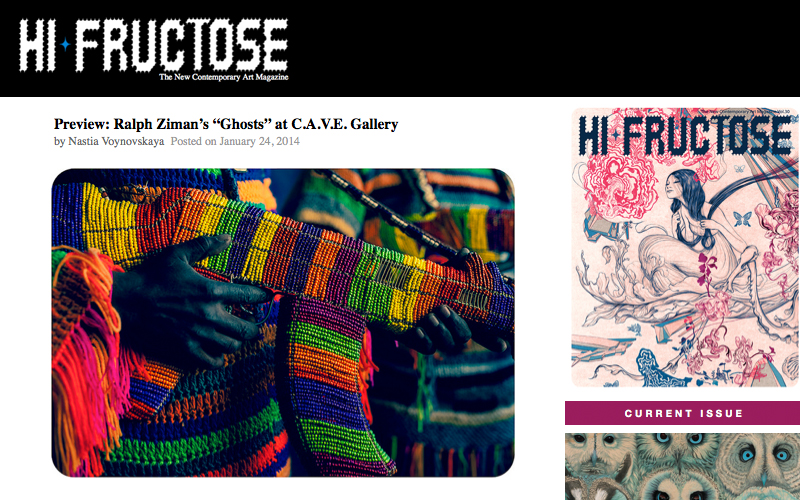 While Ralph Ziman is new to the gallery world, the artist is no stranger to creative production. His credits as a director are extensive — with videos for artists from Michael Jackson to Ozzy Osborne — and he is the writer, director and producer of Hearts and Minds, the first South African independent feature film completed after apartheid. While working on a forthcoming feature film, his photo series, Ghosts, emerged as a side project that turned into a six-month collaboration with several artisans working on the streets of Johannesburg. 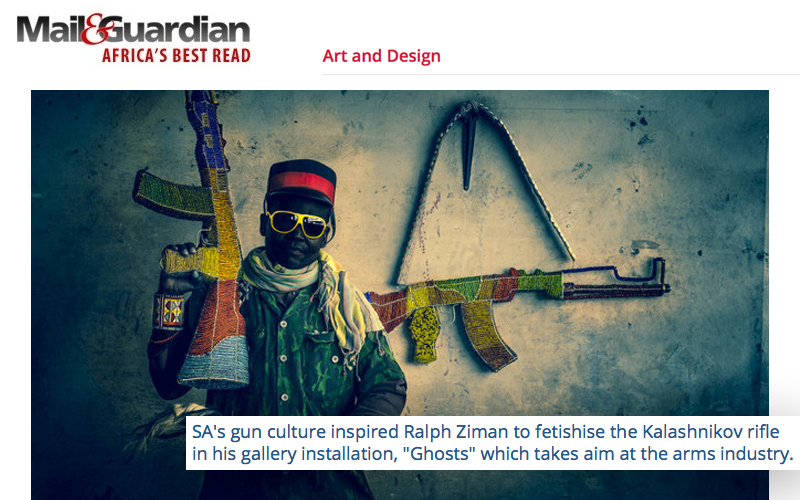 Best known as the director of the 2008 South African crime film Jerusalema and for his music video work with such top stars as Tony Braxton and Michael Jackson, Ralph Ziman’s new art installation Ghosts is a powerful comment on the global arms trade and the worship of guns in South African society. 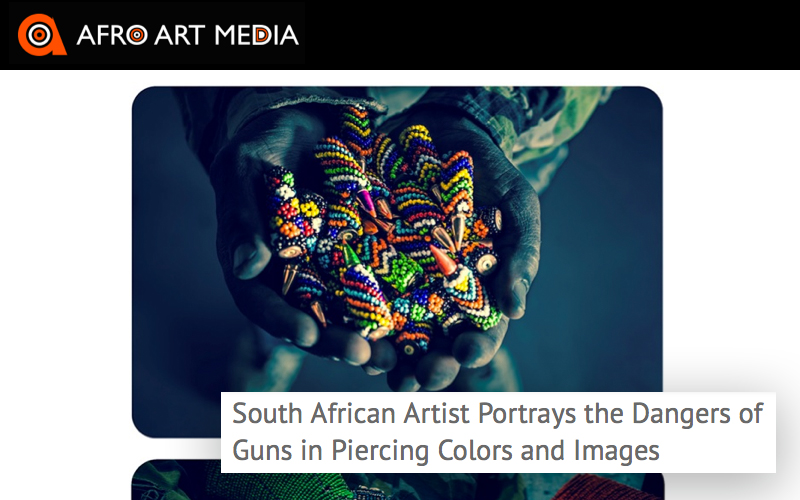 What caught my eye in the described events was the fact that the lawyer focused much in representing suspected hardcore criminals who mostly fell into the police most wanted list. As a result of his practice a shadow of enmity developed between him and the police and in an ugly incident he was shot dead when handling a case of robbery which saw Ksh96 million stolen from a Standard Chartered Bank.

Coincidentally the lawyer whose reputation was built through mostly representing gun-handling criminal suspects died from bullets fired by an unknown gunman.

The beautiful and informative multimedia project illuminates the ugly truth which brings danger and suffering as a result of arms dealing.

With the actors knitted in masks and holding beade d weapons, Ziman paints an African image that symbolizes the obsessive gun culture in the region. the dangerous and bizarre power resulting from it and the consequences brought by the vice which include child soldiers, corrupt dictatorship and suffering beyond measure.

From the view point of the discourse surrounding the gun culture, Ziman challenges the African continent and the entire world on corruption and greed which are mostly upheld through the authoritative gun power. Herc are the illustrations of the “Ghosts” series. 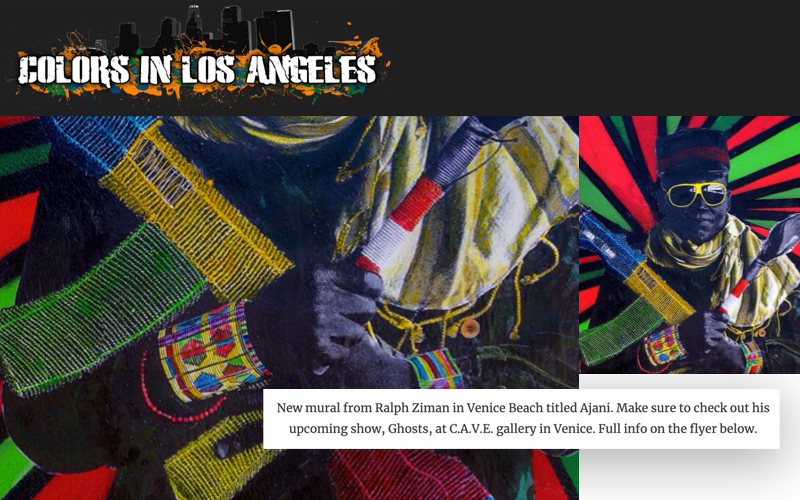 READ THE ARTICLE
THE GHOSTS PROJECT
THE CASSPIR PROJECT